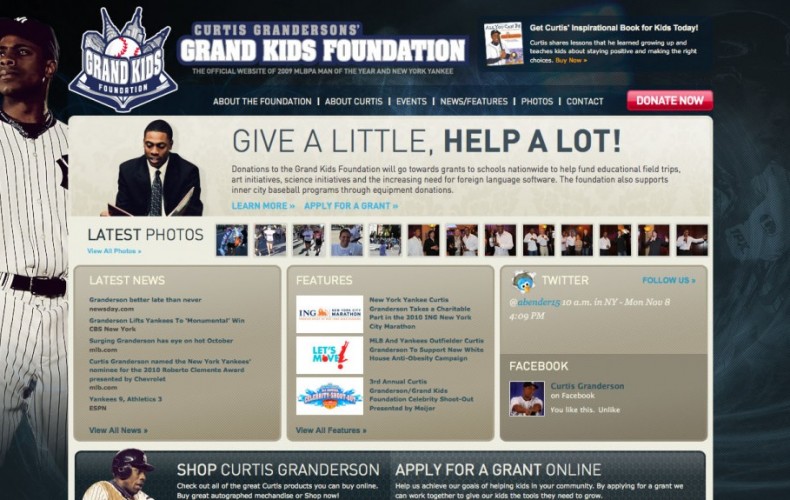 The site will serve as the online home for the 2009 MLBPA Man of the Year and his charitable organization. The Grand Kids Foundation focuses on improving the educational experience for youth nationwide and helping establish baseball opportunities for inner city youths.

In addition, Walk Design has made it easier for Curtis to easily post images and videos from remote locations so he can continue to stay linked with his fans.

2009 All-Star center fielder Curtis Granderson is sometimes known as “the nicest guy in baseball,” and he has the community credentials to support it.  In 2007, he founded the Grand Kids Foundation to focus on improving the educational experience for youth nationwide as well as helping to re-establish baseball opportunities for inner city youths. Through a variety of yearly events such as his annual celebrity basketball game, sponsorships and donations, the Grand Kids Foundation will be able to achieve many of Curtis’ goals within the community.  Curtis is committed to making education the focal point of his message to youth. It is his passion, principles and vision that lead to the creation of the Grand Kids Foundation. In addition to founding and serving on the board of this charitable organization, he attends fundraisers throughout the year to raise funds supporting educational causes.

The Grand Kids Foundation has awarded $80,000 in grants to various programs and schools throughout the nation since its inception.  In 2009, Curtis released a children’s book, All You Can Be, which shares personal stories from his youth encouraging children to chase after their dreams.  The book-included artwork from fourth-graders throughout the state of Michigan following a contest held statewide.  Proceeds from All You Can Be benefit the Grand Kids Foundation.

For his work with schools, Curtis was named the 2009 MLBPA Marvin Miller Man of the Year, and has been nominated for the prestigious Roberto Clemente Award three times (twice in Detroit and once in New York), which honors the MLB player that contributes the most off the field. He also acts as the official MLB Spokesperson for First Lady Michelle Obama’s Let’s Move anti-obesity campaign and has served for three years as MLB’s Overseas Ambassador.

Curtis is one of only a handful of MLB players and coaches with a four-year college degree, graduating from the Univ. of Illinois-Chicago with a double major in Business Management and Business Marketing. Both of his parents taught in Chicago Public Schools and his sister is a college professor. The Granderson family has always stressed education, and it has become Curtis’ passion.

While on the field, Curtis has proven himself to be one of the top center fielders in all of baseball.  In 2007, he became just one of four players in MLB history to record 20 doubles, 20 triples, 20 home runs and 20 stolen bases in a single season, a feat that had not been reached since 1957.  He led the American League in triples in both 2007 and 2008.  As a leadoff hitter for the Detroit Tigers, Curtis set the team record for leadoff homeruns in only four season, hitting 24 in that span.  He is currently the center fielder for the 27-time World Champion New York Yankees.

Donations to the Grand Kids Foundation will go towards purchasing school supplies for youths in need, books and supplies for schools which do not get the funding they always need, establishing and providing equipment for inner city baseball programs. The next step of the foundation is to establish a nationwide grant program, which will assist schools with art projects, field trips, supplies and computer software that is education-based.

The foundation has zero operating costs, which means that every penny donated to the Grand Kids Foundation goes back into the education of our nation’s youth.

Walk Design is an award-winning full-service digital marketing and design firm uniquely positioned for the modern day economy. Our collaborative approach ensures design and strategic solutions that are both dynamic and consistent with your brand values and that will keep your brand relevant in a constantly changing world.

Due to our success working with internationally known brands such as Kraft Foods, Hasbro, Ragú, Johnson & Johnson, Waterford, Cornell University, Cartoon Network, Nickelodeon and HBO, Walk Design is uniquely positioned to help drive your brand’s success in the digital economy.

The goal of our company is to help you discover and establish your voice and identity while building relationships with your target audience. We create, enhance, improve and work with you to rethink your brand so that it properly conveys the proper message to your audience.

But our service doesn’t end there, once a strategy and design vision is implemented we’re available 24/7 to help you feed and grow your brand no matter the need.