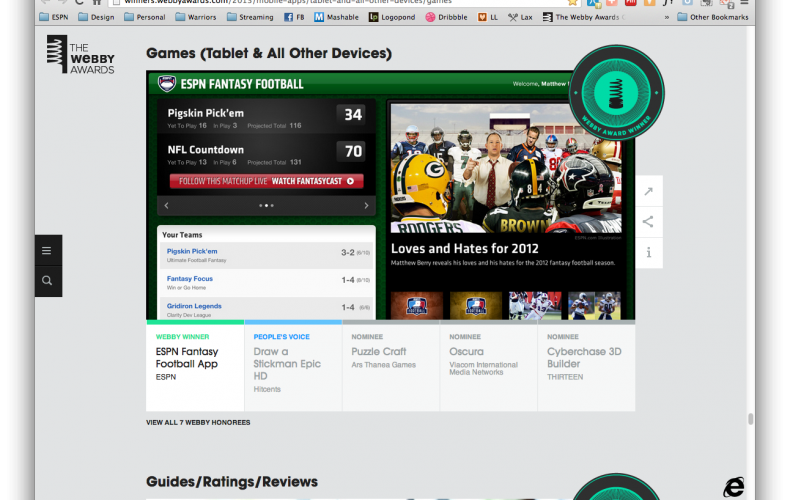 I am very happy to announce that the Fantasy Football iPad application that I designed won a prestigious Webby award. I worked hand in hand with our development team to take a pre-existing Fantasy Football UI that existed for our desktop and refine it and make it it more logical and mobile friendly. The product itself took quite awhile to develop, but it will lay the foundation for Fantasy Sports UX for the future.

Ceremony Will Be Available on Watch.WebbyAwards.com at 9 a.m. on Wednesday, May 22, 2013

“ESPN Fantasy Sports has set the standard for innovation and creativity on the Internet,” said David-Michel Davies, Executive Director of The Webby Awards. “This award is a testament to the skill, ingenuity, and vision of its creators.”

ESPN Fantasy Sports will be honored at the star-studded ceremony on Tuesday, May 21, 2013 at Cipriani Wall Street in New York City, where winners will have an opportunity to deliver one of The Webby Awards’ famous 5-Word Speeches. Highlights from last year’s 5-Word Speeches include: Pinterest’s “Pinterest loves you Ryan Gosling”; Bjork’s “A.E.I.O.U”; and Holocaust survivor Tibor Sands for The United States Holocaust Museum “Thank you for remembering me.” The show will be hosted by critically-acclaimed stand-up comedian, writer and actor, Patton Oswalt. Beginning at 9 a.m. on Wednesday, May 22, 2013, fans can watch the show in HD at watch.webbyawards.com. A full list of both The Webby Awards and People’s Voice Winners can be found at winners.webbyawards.com.

Play fantasy football, baseball, basketball, hockey and sports trivia with us! For all product support issues please e-mail espncustomercare@espn.com or call 1-888-549-3776 (from 8am to 1am EST). http://www.espnfantasy.com/

ABOUT THE WEBBY AWARDS:

Hailed as the “Internet’s highest honor” by The New York Times, The Webby Awards is the leading international award honoring excellence on the Internet, including Websites, Interactive Advertising & Media, Online Film & Video, Mobile & Apps, and Social. Established in 1996, this year’s Webbys received over 11,000 entries from all 50 states and over 60 countries worldwide this year. The Webby Awards is presented by the International Academy of Digital Arts and Sciences (IADAS). Sponsors and Partners of The Webby Awards include: Microsoft, Google+, Citibank, Twitter, Vitamin T, Quantcast, MailChimp, Yext, Engine Yard, Funny or Die, MLB Advanced Media, Mashable, Business Insider, PricewaterhouseCoopers, Area17, Forsman & Bodenfors and Guardian News and Media.